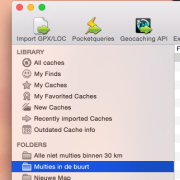 Since the start of iCaching more than four years ago, we’ve continuously been improving the application making it the most popular Mac Geocaching application. It takes a lot of effort to make and keep it state of the art. Until now every update has been available for all users, although some new features were not available for users of Snow Leopard.

But Apple moves on, and so must we… Yosemite, the new OS X is around the corner. Apple choose to overhaul the UI and add a lot of new API for us. It is undoable to keep on developing (and testing!) for five iterations of OS X and three different UI appearances (Snow Leopard, Lion and now Yosemite). So for now we announce that the next big release (5.0) will be for Lion (OS X 10.7) and higher. We’re aware that a (very?) small part of our userbase will be disappointed, but for the mayor majority we really want to stay up to date. In the meantime there will be at least one bugfix update for all users.

Just a little example for how difficult it is to support so many versions of the OS:

The left pane in iCaching with the Folders has colored icons in the current version. Since Lion, we should have used Apples so called template style images; grayscale images that are colored by the system (as in Finder) that are inverted when the row is selected. In Yosemite we must use these template style images to support the nice vibrant (translucent) style, but it is (almost) impossible to use this style and stay compatible with Snow Leopard. Let’s give an update about the near future of iCaching. Within a few days we hope to submit a version 4.70 to Apple for review. This will be a bugfix release for the following issues:

– Sorting the cachelist after adding or deleting caches isn’t always working correctly
– The number of founds is not always correct after sending logs to Groundspeak
– The ‘Get more logs’ button on the Log tab doesn’t work.
– Uploading photos with logs doesn’t always work correctly.

In the meantime we’re also working on a big new 5.0 release. There are two main themes for this release: bring the UI (including the App Icon!) in line with the upcoming new OS X version (Yosemite) and secondly; add Geocache Photos to the mix. The release of this version will take a little time, but we hope to be ready when Apple is ready to launch Yosemite.